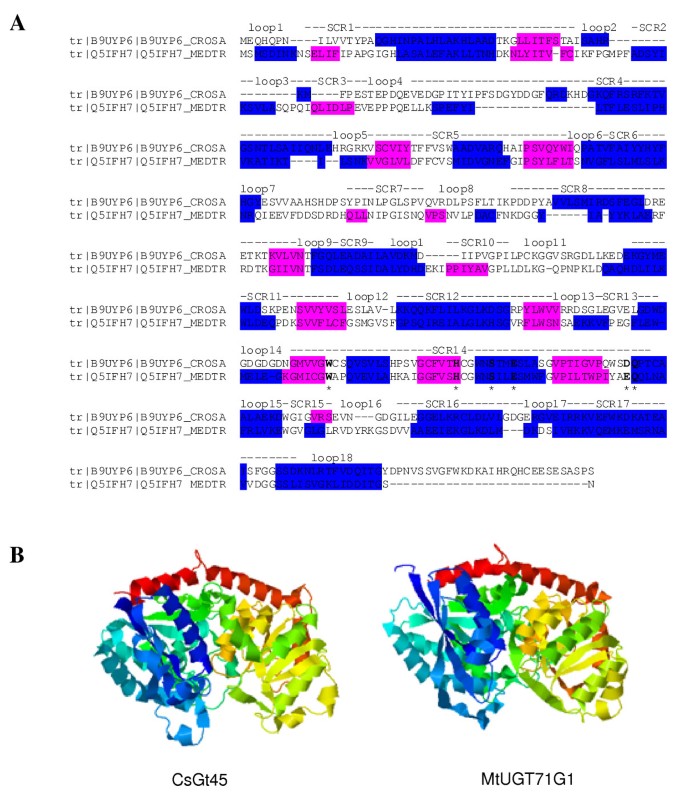 Findings presented here suggest that CsGT45 is an active enzyme that plays a role in the formation of flavonoid glucosides in C. sativus.

Stigmas at the time of anthesis were ground in liquid nitrogen. The fine powder obtained was extracted with methanol (500 μl), centrifuged and the supernatant analysed by LC-ESI-MS using a C18 Ascentis column 15 × 2.1, particle size 3 um (Supelco, Sigma-Aldrich) and following the method previously described [81]. For flavonoid analysis from stigmas at different developmental stages (yellow to +3da), three stigmas of each stage were collected and freeze-dried. The powder obtained from one stigma was extracted with 500 μl of methanol containing 0.2 mg/ml 4-methylumbelliferyl β-D-glucuronide as an internal standard. The samples were centrifuged (5,000 g, 10 min), and the supernatant evaporated and treated as described [15]. Samples in triplicate were analysed by HPLC as described [81] using a C18 Ascentis, 25 × 4.6, particle size 5 um column (Supelco, Sigma-Aldrich). 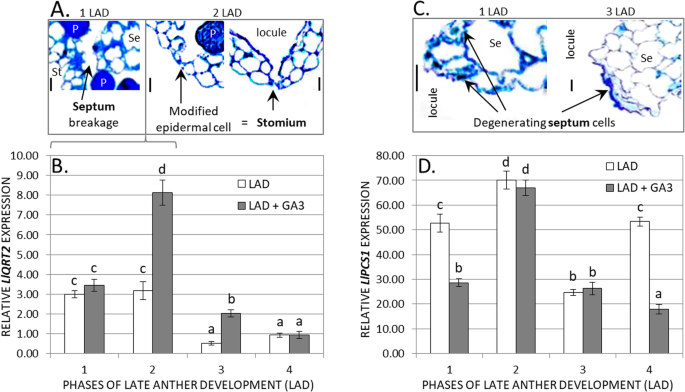 In yellow lupine, GA3 likely participates in the regulation of LlGAMYB by controlling the LlMIR159 expression level. The LlGAMYB and LlMIR159 transcriptional activity in four selected phases of LAD, as well as after GA3 and PAC application, were examined (Fig. 6). The LlGAMYB expression was almost identical with or without GA3 treatment, but the lack of GA3 due to PAC application resulted in increased LlGAMYB transcripts, especially in the first and second LAD stages (Fig. 6A). These results suggest that GA3 possibly indirectly regulates LlGAMYB expression. Therefore, we examined the LlMIR159 expression profile (Fig. 6B). GA3 treatment increased LlMIR159 mRNA levels, and importantly, PAC application significantly decreased the expression of LlMIR159. By analysing the natural conditions without the application of any compounds, it can be concluded that LlGAMYB expression is high in the first two stages of LAD and then decreases. This negatively correlates with the transcriptional activity of LlMIR159, which was significantly increased in the second phase of LAD. This is probably the cause of the reduced mRNA content of LlGAMYB in the third and fourth LAD stages. The results suggest that LlGAMYB is coexpressed with LlMIR159 in yellow lupine anthers. It also follows that the LlGAMYB transcript level is potentially regulated by miR159 in the anthers of yellow lupine.