Speaking to Scientific American, two biologists at Brookhaven National Laboratory explain that normal fruit starts to develop when a flower’s egg cell is fertilized by pollen. Parthenocarpic fruit, in contrast, develops without fertilization. Fruit can be parthenocarpic for a variety of reasons, such as problems with the eggs or sperm, problems with pollination, or chromosomal imbalances.

Seedless or “large-fruited” limes have three sets of chromosomes rather than two. While some parthenocarpic fruits occur naturally, this genetic abnormality makes wild reproduction extremely rare for Persian limes. To overcome this, farmers use a technique called grafting, where part of a seedless lime tree is removed and inserted into a new tree. This essentially clones the original tree, ensuring that more seedless limes will be produced. (Farmers can also use grafting to fix fruit trees that have been injured.) Grafting allows farmers to produce seedless fruits on a commercial scale.

Lemons and limes are both citrus fruits, and their juice and zest are often used interchangeably in recipes. So why do lemons (and most fruits) have seeds while limes don’t?

The majority of limes sold in the U.S. are Persian limes (Citrus latifolia). While often thought to be its own species, the Los Angeles Times says this fruit is “a natural hybrid of true lime and citron.” Also called Tahiti or Bearss limes, these limes are parthenocarpic, meaning they’re produced without fertilization and are thus seedless. On the other hand, true limes (Citrus aurantifolia, but known commonly as Mexican, Key, or West Indian limes) do have seeds. Because Persian limes are bigger, have a thicker skin, and are more resistant to diseases than true limes, Persian limes have a longer shelf life. But where do they come from if they don’t have seeds?

While most limes you see in the supermarket are probably seedless, some varieties of lime do indeed have seeds. And although most lemons have seeds, some lemons are actually seedless. You may find an occasional seed even in “seedless” lemons due to cross-pollination if the lemons were grown near other fruits. Lemons without seeds are more difficult to find in grocery stores than regular ones, just as limes with seeds are harder to find in stores than their seedless counterparts. 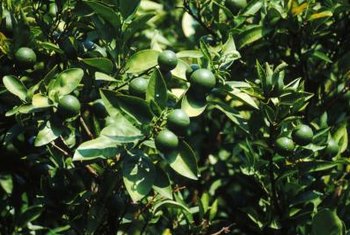 Lift the propagation dome for 20 to 30 minutes every day and whenever condensation forms on the inside. This allows trapped moisture to evaporate. Poke holes in the plastic wrap, if you are using it instead of a propagation dome. Watch for germination in two to six weeks after sowing.

Acclimate the key limes to direct sun for two weeks in late summer. Transplant them into a permanent bed or large container in fall, when the weather is slightly cool and moist.

Sow the key lime seeds in individual 4-inch pots filled with a sterile, fast-draining growing mix made up of equal parts seed compost, perlite and horticultural sand. Sow them at a depth of 1/2 inch.

Gather key lime seeds as soon as the fruit ripens to a solid, light green color. Pick two or three healthy, unblemished fruits directly from the tree rather than gathering them from the ground. Avoid fruit with bird pecks or other signs of damage.

Sometimes called Mexican lime, key lime (Citrus aurantiifolia) is a compact species of tropical tree grown for its tart, edible fruit and aromatic foliage. It grows in U.S. Department of Agriculture plant hardiness zones 9 to 11, where it will reach a height of 20 feet with a dense, rounded canopy of evergreen leaves. Unlike most fruit trees, key limes propagate reliably from fresh seeds and the resulting trees will begin producing fruit in three to six years. The seeds are susceptible to rot and must be grown under barely moist conditions to successfully germinate.

Transplant the key lime seedlings into larger nursery containers, filled with citrus-formula potting soil, once they are 2 inches tall. Grow them outdoors with limited afternoon sun until late summer.

Maintain constant, light moisture in the top 1 inch of growing mix. Water with a spray bottle to prevent the growing mix from becoming saturated. Always let the top 1/4 inch dry out between waterings.