The second disc presents exclusive recordings of Seeger-related songs by a diverse assortment of highly respected folk musicians. Janis Ian, Tom Paxton, Natalie Merchant, Pete’s fellow ex-Weaver Ronnie Gilbert, Holly Near and many others explore some of the lesser known entries in Seeger’s repertoire. Highpoints include Pat Humphries’ cover versions of Pete’s meditations on the circle of life (“Old Devil Time” and “To My Old Brown Earth”), a slow, almost psychedelic rendition of “Bells of Rhymney” by Dick Gaughan, Natalie Merchant’s fierce “Which Side Are You On,” and Janis Ian’s quietly bitter take on “Who Killed Norma Jean.”
Both discs are interspersed with spoken comments by Pete, and the packing includes a 28-page booklet with extensive liner notes by Pete himself detailing the inspiration behind many of these songs.

This final, GRAMMY-nominated installment in the Appleseed label’s trilogy of celebrations of Pete Seeger’s music (“Where Have All the Flowers Gone” and “If I Had a Song” are the first two volumes) is a 2-CD set that opens with Pete’s first disc of new recordings since his 1996 Grammy winner, Pete. On disc one, 84-year-old Pete, family members (grandson Tao Rodriguez-Seeger and half-sister Peggy) and musical friends (Arlo Guthrie, Anne Hills, and Tom Pacheco, among others) perform songs he wrote, adapted or adopted. Several pro-peace songs here were recorded even as the U.S. was invading Iraq, including an updated version of the Vietnam-era “Bring Them Home” featuring guest vocalists Billy Bragg, Ani DiFranco and Steve Earle. Other songs on disc one range from the lighthearted (“English is Cuh-ray-zee,” “Maple Syrup Time”) and optimistic (“A Little a’ This ‘n’ That,” “Over the Rainbow”) to pained political outrage (“Estadio Chile”) and social commentary (“Take It from Dr. King,” “Visions of Children”), concluding with the autumnal tranquility of “Sailing Down My Golden River.”

Note: The two songs Pat sings are the ones she sang to Pete at his bedside, as he passed in 2014.

This final, GRAMMY-nominated installment in the Appleseed label’s trilogy of celebrations of Pete Seeger’s music (“Where Have All the Flowers Gone” and “If I Had a Song” are the first two volumes) is a 2-CD set that opens with Pete’s first disc of new recordings since his 1996 Grammy winner, Pete. On disc one, 84-year-old Pete, family members 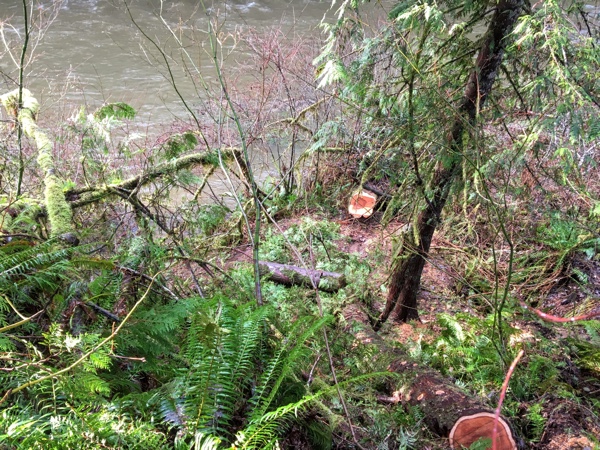 I checked out my path down to the bank. I had always tied my rappel line to the fallen cedar; I will have to rig up something else temporarily until I get the debris cleared out of the way and a permanent trail built. But, the bank down below was now wide open. Nothing was obstructing it; there was plenty of room for tents and a fire pit. Moreover, the tree trimmer had cut a bench into the remaining stump. Awesome! That was super sweet!

But, armed with my research and printouts, I had a better idea of what to look for: cones. Douglas fir cones are very distinctive with their “mouse tails.” Sitka spruce cones, on the other hand, are long and slender and bendy. Before I headed out that morning, I picked up some branches and cones that had fallen in the RV park during the previous night’s storm, and they were definitely Douglas fir. I now had something real with which to compare my trees.

Holly on the left, Oregon grape on the right. Although both have prickly leaves, notice the holly leaves are alternating, while the Oregon grape are arranged opposite each other.

I could smell the cut cedar as I approached the north end. As with the southern end of the property, this area is now opened up to a fabulous view of the river. And, now that the cedar is cut into manageable six-foot logs, it doesn’t look nearly as daunting. I think I can move those logs by myself. First, I need to clear away the piles of branches. I’d spent the previous Saturday out here clearing away the vine maples that had been trapped underneath it, but I had only moved those to the side. They needed to be sorted and moved, too. Anything worth using as firewood, fence posts, or walkway supports would be saved; the rest would be composted.

Unfortunately, I had damaged my chainsaw while clearing out the vine maples the previous Saturday, so I had to resort to my hatchet and folding hand saw for trimming the branches. But, I had the job done in about an hour, adding quite a bit more wood to my “keep” pile.