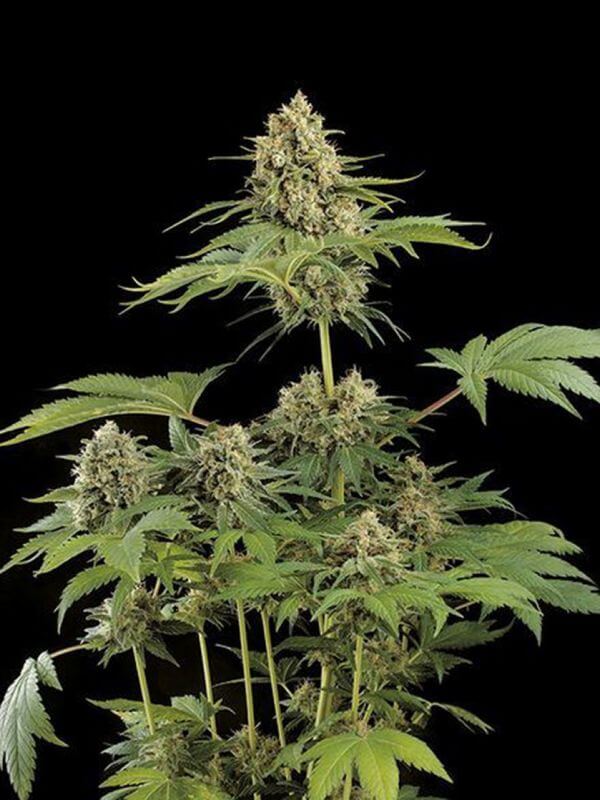 In indoor cultivation it requires about 60-70 days to finish flowering, and it’s ready by mid-October outdoors. Its production is already legendary, with about 650g/m 2 under artificial lights, and up to 1500g/plant outdoors, where it develops its full potential.

It’s very easy to grow, especially in terms of resistance to adverse conditions, and compensates its low maintenance with impressive crops.

Moby Dick has become one of Dinafem’s stellar strains. This spectacular sativa dominant hybrid is a cross between an aromatic Haze and the legendary White Widow, resulting in a strain with potency only comparable to its yields.

Moby Dick grows vigorously both vertically and horizontally, developing the shape of a Christmas tree. With a significant internodal distance and the typical leaves of hybrid varieties, once it starts blooming it will develop an impressive central bud. Bear in mind that it needs plenty of nutrients and all the light you can provide to reach its full potential.

Moby Dick is known all over the world for its amazing yields in any set-up and it strong effect, which is both physical and cerebral.

Aside from its high production, this multi award-winning strain has become very popular for its strong Haze aroma with intense notes of lemon, wood, incense and spices. A true delight for lovers of the classic Haze with very subtle Widow genes.

Moby Dick is a moisture-resistant and very robust plant, although it needs adequate nutrition to feed its monstrous buds. Due to its large size, it requires a lot of space and copious amounts of water, as well as enough vertical room due to its significant stretching during the pre-flowering stage. Techniques such as SCROG and LST are more than adequate for this plant.

Moby Dick feminized seed from Seedstockers is a genetic no cultivator is going to want to miss out on. It represents decades of hard work and its genetics sourced from all over the world in order to produce one of the must stunning examples of domesticated sativa genetics available today. A quick flowering plant, with obnoxiously heavy yields, the Moby Dick strain is a thrill to cultivate and a favorite of consumers.

Free shipping with orders above €250

All Seedstockers products are guaranteed to be high-quality.

You can pay with Visa/Mastercard, bank transfer or by cash.

Moby Dick feminized seeds will produce incredibly powerful and potent buds. The number of trichomes that give the snow covered appearance are powerhouses of cannabinoid and terp production. THC levels can top out at 26%+ and in some cases even trace amounts of THCV have been reported as being present – this may partially account for why the experience and effects are so psychedelic and powerful. Expect incredible vanilla and sugary flavors. While other genetics can sometimes be over powering in their odor – the Moby Dick strain is light and sweet in a way that many consumers find refreshing. Some userse have described Moby Dick as citric with eucalyptus blended in.

Seedstockers Moby Dick strain is the prodigal daughter of White Widow. In the late 1980’s and early 1990’s, White Widow was the source of tons of buzz within the industry. Everyone wanted to get their hands on a cut of the original widow. Since then its won cup after cup, for the devastatingly snow covered buds it produces and for its powerful and long lasting effects. By crossing White Widow with an unknown Haze variety (probably an original haze acquired from the Haze brothers) we’ve created a mind-bending and super psychedelic, feminized, sativa genetic with a shorter flowering period – making the Moby Dick strain suitable for indoor and outdoor cultivation.

Thanks to a half century of dedicated breeding with the most elite genetics from all over the world, Moby Dick feminized seeds express some of the most desired traits in terms of cultivation. Vegetating plants will benefit and respond happily to cropping and training of the branches. Expect sturdy branching structures that will absolutely hold up massive amounts of weight; this said, the gigantic and heavy harvests of the most sought after buds means constructing support latices and structures is vital when growing the Moby Dick strain. Thanks to selective breeding techniques, you’ll be able to harvest as early as 9 weeks after the first signs of flowering when growing indoor, and in the middle to end of October in the Northern Hemisphere outdoor. This is a phenomenally short flowering time for a sativa genetic, and in fact those in the know might leave their plants to go an extra week or two still if they want to really bring out the very best of the award winning ancestry found in Moby Dick. Effects
Strong, intense sativa high, combined with a powerful body-stoned feeling that does not want to leave for long time.

COOKIES ARE USED ON THIS SITE TO PROVIDE THE BEST USER EXPERIENCE.
IN ORDER TO CONTINUE AND AGREE TO RECEIVE COOKIES FROM THIS SITE CLICK OK

Flowering Outdoor
Finishes by the first week of October (North hemisphere) with a production up to 1200 gr/plant.
Tall plant, long branches.