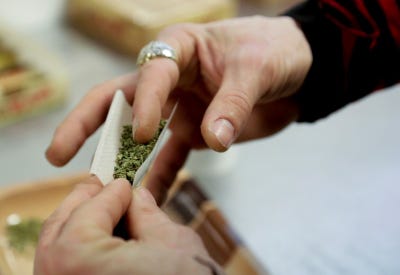 The Drug Enforcement Administration — which dictates the legal status of controlled substances — announced last year that it planned to increase the supply of medical marijuana available to researchers, potentially paving the way for the Food and Drug Administration to approve a non-synthetic marijuana-based drug.

Spokeswoman Stephanie Gostomski said all of the sites will be indoor, high-security, regulated businesses — not outdoor farms or even the type of traditional greenhouses that Ohioans might envision.

Here’s a map of the locations of the growers in the state:

Prior to the DEA’s ruling, the only supply of marijuana available to researchers was grown at a facility at the University of Mississippi, and many complained that the marijuana was low-quality.

The state has offered the maximum number of licenses that it was allowed.

Some local governments have instituted moratoriums on growing or dispensing medical marijuana, but the department isn’t aware of any such conflicts with the locations for the selected smaller growers. One of the businesses, Harvest Grows LLC, submitted applications for two locations — one in Hamilton Township in Lawrence County, and one in Cleveland. It will have 10 days to pick between the two.

Ohio’s medical marijuana law, passed last year, allows people with medical conditions such as cancer and epilepsy to buy and use marijuana if a doctor recommends it. It doesn’t allow smoking.

Ohio accepted 185 total applications, which are evaluated based on their plans for business, operations, quality assurance, security and finances.

“It’s a very high-dollar crop, obviously,” DeJesus says. “So when I was growing heirloom tomatoes, the best price I got was $3.25 a pound, wholesale. If you lost 100 tomato plants, it wasn’t really a crisis. But if you were to lose 100 cannabis plants, you’re in a very different situation. It’s kind of a pressure that’s a little different than any other type of agriculture I’ve done.”

“The state has 24/7 access to our camera footage,” Korff says. “Every one of our plants in our facility has to be tagged and uploaded to a software system that the state has access to. So they see in very real time what’s moving through the facility at any given time, and there are kind of hand-off points.”

And that’s just the backend of cultivation. In the “mother room,” they maintain about 45 plants that are used to create clones. That’s where cuttings are taken from the mature plants and placed into a potting mix.

DeJesus decided to join Korff when she learned that Galenas completed the Certified KIND organic program. Plants are growing in organic soil without pesticides, and they use LED lights instead of traditional grow lamps, which also cuts down on their cooling costs.

Akron cultivator Galenas just completed its third harvest, and while yields haven’t been what they anticipated, Korff believes it will be worth the wait.

There were about 125,000 active registered medical marijuana patients in the state as of July 31. The state’s initial business license caps were based on a patient population of about 24,000.

The expansion process comes as the state plans to more than double the number of dispensaries to sell medical marijuana and after Akron-based cultivator Fire Rock Ltd. sued the state for failing to act on its February 2020 request to expand.

Fire Rock appealed through the administrative review process. But after Wednesday’s announcement, the issue could be moot.

Expansion was “premature” because there was “a sufficient program-wide supply,” Commerce Director Sheryl Maxfield wrote to Fire Rock in April. The letter also noted that seven cultivators were not yet operational, representing 24% of all allotted grow space statewide.

The Department of Commerce sat on Fire Rock’s request and the company sued. The Ohio Supreme Court ordered the agency to make a decision, and the request was rejected.

Expansion requests will be granted to businesses that have complied with rules and regulations, are already using the maximum amount of space allowed by the state and demonstrate a need to expand to keep up with demand, the Ohio Department of Commerce announced Wednesday.

The seven cultivators mentioned in the April letter are still not yet operational. The seven cultivators that previously applied for expansion were Fire Rock in Akron, Ohio Clean Leaf in Dayton, FN Group in Ravenna, Ancient Roots in Wilmington, Agri-Med in Langsville, Galenas in Akron and Farkas Farms in Grafton.