To flush, excessively water your crop with H2O that has a pH level of between 6.0 and 6.8 if soil is the growing medium, or between 5.5 and 6.5 if you are using a hydroponics system. Saturate the pots entirely and repeat the process within 15 minutes. Hopefully, the flushing process will remove any blockage and make room for a new feeding schedule, or else it will remove the last traces of nutrients before harvest.

If you grow AK-47 outdoors, you must also take great care to ensure the smell isn’t picked up for miles around. It is ready for harvest towards the end of October, and you should receive approximately 14 ounces of bud per plant.

When it comes to growing your favorite strain, it is essential to understand that there are useful tips and tricks for each specific type of weed. For instance, AK-47 is a sativa-dominant (65%) hybrid, which means it is likely to grow short and stout rather than tall and thin. As a result, it is an excellent option for an indoor grow, although its pungent aroma means nosy neighbors could get a whiff!

During the day, your weed takes in carbon dioxide (CO2) from the air, water from the roots, and the sun’s energy to create their source of energy, sugar. Your plants store and consume the sugar in a process known as photosynthesis. If a plant doesn’t have enough access to light, it needs to absorb its stored sugar to survive. This means consuming oxygen, which is necessary to break the sugar into usable energy.

One of the great mysteries behind this strain is the reason why it was named after a Russian assault rifle. Given the name, you would expect AK-47 to be a hard-hitting strain capable of knocking you out. However, it is known for causing a euphoric feeling. One of its most obvious effects is the clear-headedness it provides almost immediately. Within a few minutes, you’ll be sitting down with a stupid grin on your face, and have no idea why!

AK-47 is a cross of an Afghani Indica mixed with a Thai, South American, and Mexican Sativa. Serious Seeds created it way back in 1992, and it has won an array of awards. In 1999, it narrowly missed out on the prestigious High Times Cannabis Cup award for best sativa. However, over a decade later, AK-47 scooped first prize at a Toronto expo. To date, AK-47 has won 16 awards, making it one of the most successful marijuana strains ever.

You increase the risk of deficiency if you overwater the plant, keep the temperature below 55 degrees, or allow the pH of the soil to go outside the 6.0-6.8 range. If your crop has a Phosphorus deficiency, flush the plants immediately, and use a P booster. If you want to add organic fertilizers to your soil, consider bat guano and bone meal, as both are high in Phosphorus.

When it is allowed to develop, bud rot takes on a black or dark purple color. Eventually, the buds become dark and mushy. After you break open an infected bud, you’ll see the fungus located deep within the flower. Botrytis cinereal causes this infection. It is a fungus that attacks the interior of the buds and works inside out. Bud rot usually gets spread through strong winds and rain, which help spread the spores. It infects plants through a wound (possibly caused by plant training) and thrives in humid conditions. 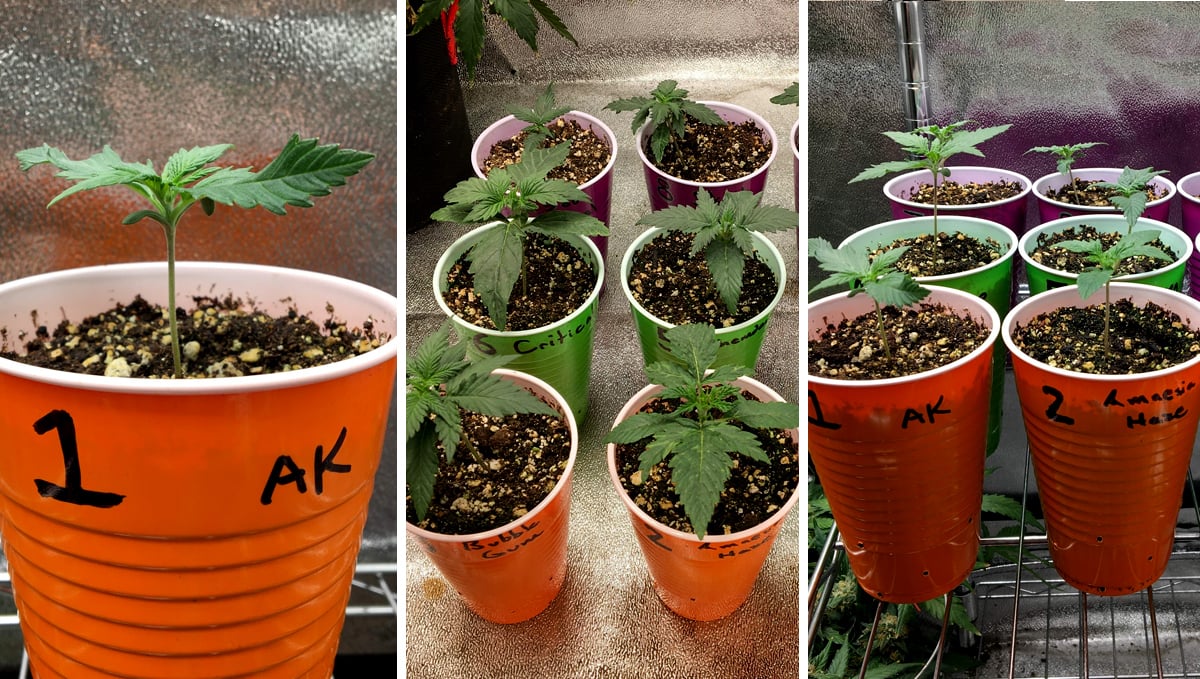 By now you should already be giving a full dose of Grow nutrients and preparing to gradually start feeding Bloom nutrients which your plant needs to produce buds and you should start feeding in a lower dose as soon as the stigmas (white hairs) start appearing.

Despite being created in the 1970s, the strain didn’t come into existence until the early ‘90s, where Simon, a biology student from Amsterdam found it as an unnamed strain in 1992 and continued to develop it further until 1999 when he made it available for purchase on his own website.

You can also use other things like odor neutralizers, but obviously, then won’t work as well as a carbon filter so make sure you’re using whatever works better in your case.

Remember that bugs can appear at any moment and if you don’t check your plants every day, bugs may end up attacking your plants so the best way to avoid this is to take preventive measures.

If you’ve done everything properly, the second week is when you’ll see your plant slowly starting to grow more and more, you’ll start to see a new pair of leaves overnight and your plant will start growing exponentially starting on week 3.