In other words, the weeds and grasses that thrive in pavement cracks do so because they are genetically well adapted to the conditions created by concrete, brick, or asphalt paving. It will take repeated efforts using a variety of methods to control these invasive super plants.

Successful weed control begins with knowing your foe's likes and dislikes and habits. In their own way, weeds are marvels of genetic evolution. s

Thanks to this genetic tenacity, grasses and broadleaf weeds that sprout up through the cracks in the pavement are very hard to control. It is easy enough to pluck the top off at pavement level or sever them with a string trimmer, but unless you extract or kill the entire root, the plant often simply sprouts up again.

You will quickly recognize that various weeds have their favorite seasons, and are vulnerable to different control methods. The damp spring might be best suited to plucking weeds by hand, while during the dry months of late summer, chemical herbicides might be the better strategy.

Click Play to Learn How to Get Rid of Weeds

The reality is that pavement weed control is an ongoing landscaping maintenance task for homeowners, but the work is easier if you have a variety of workable strategies to choose from.

In cold weather, a dark-colored asphalt driveway absorbs sunlight and keeps the soil beneath warmer than the surrounding landscape. Some grasses and weeds can easily tolerate the salts in ice-melt products. Fescue, for instance, is a cool-season grass that is somewhat salt-tolerant and might have a good chance of surviving through the winter in a driveway. Sedge is a grass relative that tends to stay green in winter. And then there are the cold-happy weeds such as chickweed that seem to scoff at temperatures at which other plants would have long disappeared.

Grasses and weeds growing out of pavement cracks in sidewalks, driveways, and patios is a common annoyance. Sometimes it seems as though these unwanted plants grow even better in tiny pavement crevices than they do in the lawn and garden. This defies all logic since pavement surfaces are brutally hot and dry places where you might think that nothing could survive. But not only do these tenacious grasses and weeds survive, they alsoseem to positively thrive in this no man’s land of blistering hot pavement.

Driveway and sidewalk cracks turn out to be surprisingly friendly places for weeds. These cracks can hold a considerable amount of soil and organic matter, a perfect bed for grass and weed seeds, which are often very tiny. And just below the surface of the paving there is often trapped moisture, and any plant that sends its roots down below the slab has access to it. 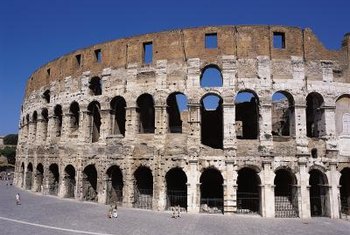 Concrete might be the perfect building material — tough, fireproof, a good insulator and long-lasting. The Roman Coliseum and Pantheon, both built around 2,000 years ago, still draw tourists who marvel at how well these concrete buildings have survived. And yet even concrete can succumb to aggressive weeds.

The terms “concrete” and “cement” are often incorrectly used to refer to the same material. However, cement is actually an ingredient of concrete. Cement is a fine powder, typically composed of ground clay and limestone, that when mixed with water creates a strong paste. The paste binds a mixture of sand and gravel or crushed rock, and the resulting material is concrete — hard, solid, dependable, capable of lasting for millennia.

Weeds Can Contribute to Concrete Decay

Like anything exposed to the elements, concrete is subject to environment stresses. Extreme cold and heat cause expansion and contraction, gradually weakening the material. Earthquakes and more subtle ground movements introduce cracks and breaks into concrete structures. Acid rain can create cracks and holes. Once a crack or break has appeared in concrete, weeds are close behind. They flourish in poor soil and grow quickly, pushing against the weakened concrete and causing more breaks and cracks — which makes room for more weeds. If left unchecked, a flourishing weed population can break apart sidewalks, driveways, roads and buildings.