The growth stages of marijuana can be broken down into four primary stages from seed to harvest:

When should you grow marijuana?

If you need to determine the sex of your plants (to discard the males), they will start showing sex organs a few weeks into the veg stage. It’s imperative to separate males so they don’t pollinate the females.

Be careful with your plants at this point. They are extremely sensitive to the conditions around them during the end of the grow. For example, without ample airflow excess moisture from transpiration can become trapped inside the constantly growing buds, causing the dreaded “bud rot” (botyritis, or gray mold) that often spreads and destroys entire harvests.

The flowering stretch (spurt of growth) starts slowing down when your cannabis plants start forming tiny buds (also known as budlets). Now, we enter the second leg of the cannabis flowering cycle. Each stage of the bloom cycle is more critical than the last, so you should be very careful since any mistake or problem can affect your yield or harvest quality.

Week 4-6: Fattening of the Buds

During this portion of the many cannabis flowering stages, you may notice buds that form beneath or on the sides of existing buds. This phenomenon is called “foxtailing,” and while it can be observed naturally with some strains, it is more typically a sign of environmental stress, either from too much light or too high temperatures. Find out which applies to your situation and adjust accordingly.

The flowering stage begins once the vegetative phase has ended. This usually takes 3-4 weeks, but can vary by the strain, so be sure to consider your strain first. If you are growing your cannabis indoors from photoperiod seeds, the flowering stage starts when you change to a 12/12 light schedule (this is when the plants receive light for 12 hours and are in total darkness for 12 hours). If you use autoflowering seeds, the plant’s genetics determines when this period begins. Once flowering begins, the cannabis flowering stages last approximately 7-9 weeks. They can be divided into the following sub-phases.

Shortly before you are ready to harvest your buds, you should flush your plants. Flushing is a simple process where you stop giving your plant nutrients, and instead, feed them pH-appropriate water. You should flush your plants from a few days to a few weeks depending on the length of the strains’ flowering stage and your grow medium. Soil retains more nutrients than hydroponic mediums and so requires a longer flush.

Whether you’re just starting to grow cannabis or you’ve been at it for a while, it’s a good idea to know what to expect during the cannabis flowering cycle. The cannabis plant has a variety of characteristics during the different stages of its lifecycle – which include germination, the vegetative stage and the flowering stage – but for many home growers, the final flowering stage is the most exciting. A lot of it is because this stage reveals what the quality and quantity of your harvest will be. Understanding the process makes growing easier. This article will go in-depth into the cannabis flowering stages , so that you can harvest higher quality buds.

Keep in mind, this article only provides a general guide. You’ll still need to tweak your process based on the specific cannabis strain you plan to grow. However, remember that every cannabis strain goes through theses stages – even the easy-to-grow autoflowering strains. The main difference with these strains is the fact that they reach the flowering stage regardless of what light cycle they’re on. For them, the onset of flowering is triggered by their genetic code rather than a change in the number of hours of darkness each day. That is precisely why autoflowering strains come highly recommended by A Pot for Pot . 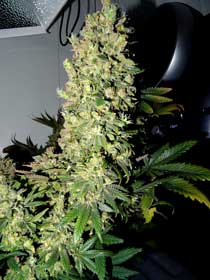 From now until harvest it’s extra important to avoid too-high levels of light or heat because (in addition to foxtailing) this can discolor/bleach/burn your buds and may even “evaporate” away some of the THC / potency.

If you keep up with it during the stretch, you can prevent any one stem from getting much taller than the others

Be especially aware of leaf symptoms, for example: discolored/yellow leaves, or if your plant starts rapidly losing leaves. It’s completely normal to lose a few leaves at this stage, especially leaves that aren’t getting light (which often look like they may have a nutrient deficiency and then fall off, but it’s just your plant cannibalizing the leaf since it isn’t getting any more light). That being said, overall your entire plant should still be lush and green in week 3-4 while your budlets are forming.

Many growers do a final flush, which involves giving only plain water to your plants (for a few days up to a few weeks) before harvest.

When growing cannabis indoors, the flowering stage begins when you change your grow lights to a 12/12 light cycle (12 hours light, 12 hours darkness each day). Getting those 12 hours of uninterrupted darkness each day gives your plant the signal that it’s time to start flowering. In a way the plant “thinks” winter is coming because the days are getting short.

Since you don’t get many more new leaves, you need to think of your remaining leaves as armor – insurance against any nutrient or leaf problems.

In order to maximize your yields, it’s important to know what to focus on during each part of the flowering stage. It’s also really helpful to know what to expect so you know when something is going wrong!

Once you’ve reached week 8, buds are fattening quickly. Trichomes and pistils are maturing, though new pistils may continue to develop on the buds as they grow.