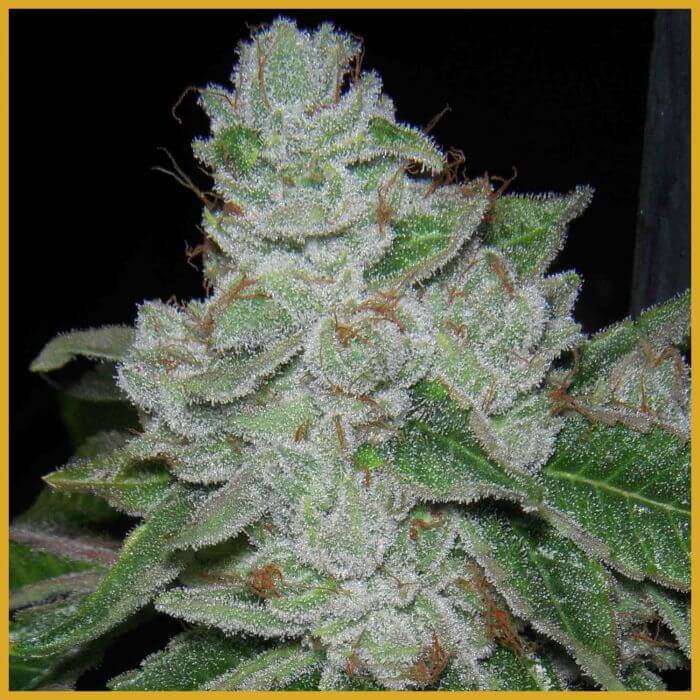 Face Off OG can tend to stretch during the onset to flowering, growing into a medium to high plant, however it reacts well to pruning and trellising, which encourages the formation of more bud sites and optimises the yield.

Expect a medium to high yield of dense and compact flowers, caked in white by a thick layer of resin that will delight lovers of cannabis concentrates. Its complex and powerful aroma combines sweet and floral notes on an organic and earthy background, while its pronounced physically narcotic effect can have medical applications in the fight against pain.

The second backcross of Face Off OG perfectly captures the essence of this old school OG Kush, nicknamed “Face Off” for its physically destructive effect. With 70% Indica heritage, Face Off is a cannabis plant that is mature and ready to harvest after just 63 days of flowering.

This project started with a batch of seeds from a memorable harvest of OG Kush, known in underground circles as “Face/Off OG”. After selecting the best female plant from these seeds, phenotype #4, Archive Seeds crossed it with a male Face/Off, then the offspring was crossed with the parent plant Face Off #4. From the seeds obtained from this first backcross (Bx1), a male was selected and then used to pollinate the mother Face Off #4, in order to fix its appreciable characteristics as much as possible.

Face Off OG Bx2 from Archive Seed Bank is rooted in 90’s California, sourced from a powerful and fragrant OG Kush strain, selected and reproduced as regular seeds and now available here at Alchimiaweb.

Important: Due to its high cannabinoid content and devastatingly powerful effect, Archive Seeds does not recommend this variety to users with limited tolerance.

In the late 90’s in Southern California, some particularly excellent batches of OG Kush circulated the underground market as Face/Off OG Kush. A well-connected friend scored a small handful of seeds from that herb. He gifted me a half dozen of them, and this plant, #4, was grown and selected from those seeds for its overwhelmingly unique flavour and skull crushing high. A strain not intended for the lightweights, it may turn some green for a minute or two, with an almost nauseatingly potent, initial head high. Great for heavy pain relief without the grogginess or fog of many pain medicines. This is our second Backcross to the original mother plant.