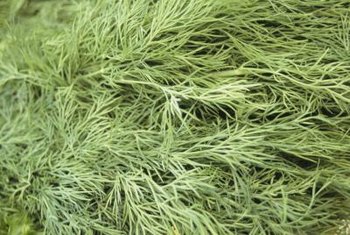 Dill prefers full sun in well-drained soil. It grows easily from seed in U. S. Department of Agriculture plant hardiness zones 8 through 10. Sow seeds 1/4 inch deep in loose soil in the early spring. Make successive sowings every two to three weeks for a continuous supply. Successive sowings allow you to let the early plants mature so you can use the seeds when cucumbers are ready to pickle. Later plantings give you a supply of fresh dill weed throughout the season. In desert areas, plant dill in late summer and early fall to avoid extreme heat. Water newly planted dill to aid germination, and irrigate occasionally throughout the season to keep the soil from completely drying out. As seedlings grow, thin them to stand about 18 inches apart. An easy way to grow dill is to allow it to reseed directly in the garden.

Harvest dill seeds from mature plants after the flowers set seeds. The flower umbrels become clusters of seeds that cling to the plant until they are completely mature. Snip off the seed heads when the seeds are brownish and dry before the seeds scatter. Hold a bag or large bowl under the heads and snip – let the seed heads drop into the container.

Wash fresh dill weed and drain it dry, chop it, then freeze it in small containers or freeze it flat on a baking sheet to transfer to small containers. To dry dill weed, loosely tie together a few branches at the base with string or a rubber band and hang the bundles upside-down in an airy location out of direct sun. Bruising the branches can cause spots of decay or mold, so handle the dill gently. You can also use an electric dehydrator to dry dill weed quickly. A dehydrator helps the dried leaves retain the bright green color of fresh dill.

Young dill plants that you thin from the garden are ideal to chop for tender, fresh dill weed. Although you can trim dill foliage at any time to use fresh, the leaves have the best flavor just before the umbrels bloom. Trimmed dill continues to grow new leaves until the plant blooms, so you can repeat harvest the foliage.

Several studies have revealed that dill can help in the management of diabetes.

Dill weed’s aroma is strong but when cooked it becomes softer and great for soft dishes. In contrast, the aroma of dill seeds is enhanced by cooking and can sometimes feel too powerful if used in excess.

What’s the difference between dill seed and dill weed?

Because dill weed and dill seed are so different in terms of taste, it is not recommended to swap one for the other when preparing a meal using a recipe. If you do this, you could end up with a meal that is not interesting or tasty.

In terms of taste, dill weed can be used fresh or when dry. When fresh, it can be mixed with cheese or soup. The weed/leaves taste like a mix of lemon, parsley, and a sprinkling of anise. In contrast, dill seeds taste different. They taste like caraway. So dill weed and dill seed taste different despite coming from the same plant.

Dill is incredibly easy to grow, so consider adding it to your garden. It's an annual, but it reseeds readily. Just allow some of the flowers to go to seed at the end of the season, and it should come up on its own next year.