Black Domina Feminized cannabis seeds are a classic redux of the original four-way hybrid. Explore the world of indicas in all their complexity and strength with this sophisticated strain. You will discover that there’s much more to this end of the cannabis spectrum than just being very stoned. Buy these seeds for big, easy harvests of premium indica buds that will satisfy even the most demanding of cannabis dominas!

The Sensi Seeds breeders started with our own Northern Lights, long praised as one of the finest indicas ever created, and renowned for its resin production. They added Ortega. This less well-known variety is a descendant of Northern Lights, which concentrates on the euphoric, pain-relieving and soporific qualities of its parent strain. Next comes Sensi’s own Hash Plant, also extremely generous and dependable when it comes to resin production. Hash Plant combines a short flowering time with substantial yields and brings these qualities to Black Domina Feminized. Finally, a carefully chosen and lovingly preserved Afghani cultivar known only as ‘SA’ was added to this indica cocktail for the finishing touches of robust performance and solid, cylindrical colas.

One of the deepest, darkest indicas ever created, Black Domina has been collecting devoted aficionados for over two decades. This feminized version of the phenomenal four-way hybrid is charming new fans and old with the same exceptional qualities, made even easier to obtain. She’s super-strong, very distinctive and utterly beautiful.

The qualities that make this 95% indica so special also make it possible for beginners to achieve successful harvests. In the hands of growers with a few cultivation sessions behind them, yields can be even larger. However, even total novices should be able to achieve big, satisfying crops of extremely potent and mouthwatering bud. Many people who initially grew regular Black Domina when it was first released in 1996 have returned to it again and again ever since, and it can truly be described as having a cult following and cult status.

In terms of growth structure, expect compact plants with a tendency to develop a massive central cola (unless they are topped or otherwise modified). Black Domina Feminized has a short flowering time of around 50 days. Naturally, it thrives well indoors, and can also be grown outdoors in areas with warm, Mediterranean type climates and long hot summers. In days gone by, when cloning was still practiced, regular Black Domina was a favourite for this technique. The feminized version fulfils many of the same requirements, providing growers with a harvest free from males and a consistent, regular supply of premium quality buds, time after time.

The strains that make up Black Domina Feminized are four of the finest indicas ever discovered. They have been collected from the premium indica-producing areas of the world. Sensi Seeds carefully combined them to create something greater than the sum of its parts: a feminized 95% indica variety that is actually quite different from any of its parent varieties.

This feminized four-way combination, as is to be expected, produces vigorous, delicious plants – all of which will flower as female – with a degree of exciting phenotype variation. All of them will display the characteristics most loved and sought-after by indica lovers: short stature, intense resin production, big solid buds, and a short flowering time. Black Domina stands out from other indicas by not only being a superb performer in every single one of these areas, but also by having an almost supernaturally dark green colouration. In certain lights, the plants can actually appear black. This unusual pigmentation affects not only the leaves, but also the buds. These can exhibit deep purple streaks among the dark green, all overlaid with vivid orange hairs and a thick, sparkling coating of trichomes.

The flavours of Black Domina Feminized are savoury rather than sweet or sour. There are strong tones of blackberry, black pepper, and a black hashish finish in this unusual strain. These unusual flavour notes also contributed to its name. Both the smell and the taste contain this distinctive blend of aromas. They overlay a basenote of earthy Afghani that experienced consumers will swiftly identify. Black Domina Feminized is one of those strains that, once you have sampled it, you will immediately recognize again!

The strength of a woman should never be underestimated, especially a domina! This strain has been praised by growers and consumers alike for its heavy, soporific effect. This can be so powerful, it has been described as narcotic. Black Domina Feminized cannabis seeds are an excellent choice for anyone looking for a solid, heavy crop for relief from pain, insomnia, and muscle tension. It is not really recommended for daytime consumption, unless you are planning a day of just relaxing!

Black Domina is an indica marijuana strain made by crossing Northern Lights, Ortega, Hash Plant, and Afghani. This melting pot of a strain delivers effects that are relaxing and sedating. Black Domina features a spicy pepper aroma and flavor. Medical marijuana patients choose this strain to help relieve symptoms associated with insomnia. Growers say Black Dominan has a rapid flowering time and produces buds that are coated in trichome crystals.

Black Domina is an indica marijuana strain made by crossing Northern Lights, Ortega, Hash Plant, and Afghani. This melting pot of a strain delivers effects that are relaxing and sedating. Black Domina features a spicy pepper aroma and flavor. Medical marijuana patients choose this strain to help relieve symptoms associated with insomnia. Growers say Black Dominan has a rapid flowering time and produces buds that are coated in trichome crystals. 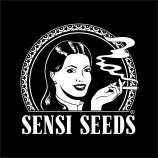 Black Domina grown from seed will display favourable phenotype variation, always with strong Indica characteristics – speed, density, compact stature and amazing resin production – giving any Domina female the potential to be a rewarding, productive mother plant. The phenotype known as the definitive Domina lady can be spotted early in vegetation by her extra height-gain, black-green foliage and huge fan leaves made up of slightly elongated blades. Later in flowering, a massive, sparkling, nearly-spherical central cola makes this phenotype unmistakeable. Growers who are serious about cloning should select their darkest Domina females as ‘mistress plants’ to provide year after year of world-class cuttings.

Here you see the latest Black Domina photos, uploaded from our users! Altogether we’ve collected 46 pictures from Sensi Seeds’ Black Domina, check out our Black Domina gallery to view them all.

Today I made my first test. Cause of the highly praised strength I was careful with the dosage. It was not a "pushdown", what I did not want anyway. The high evolved slow but mighty. I put me asleep unfailing. The head-effect is nice! But I could not sleep all night, woke up some times. That is not what happens usually to me when using Indica weed. Since it was the first try, I do not overrate this.