One of the reasons you still hear people claiming that LED is not ready for commercial cannabis grows is because the reflectors from an HPS fixture mounted 4 ft from the canopy will provide a wide angle of light so the crop will receive light from the fixture directly above as well as the lights from the next row over and even 2-3 rows away. This light is coming in from different angles hitting the crop beneath the canopy leaves that are causing shadows from the light above. This does not happen if you are using an LED fixture that is a big panel of LEDs or made up of multiple LED bars where they have to be mounted 9-12 inches from the canopy. You get no crossover from the fixtures but only shadowing from the top of the canopy.

The best advice I have is to get a comparison of your ROI done by a versatile company. One that can offer both technologies where you can have light plans designed to the same levels with both technologies. Don’t trust just what the LED guy says or the only HPS guy says. Look at both, do your own math. Know what works for the strains you are growing and measure your own ROI. The easiest way to do this is going to this link and ask your local PL Light Territory Manager for advice as we are the “Lighting Knowledge Company” and whether you decide to use LED or HPS, you will get a true and honest comparison of both technologies.

There is a lot of information out there on the internet from various growers and lighting suppliers. You can find a contradiction to almost every point you find! Most growers agree that for young plants through the veg stage of growth you will want to have a light source with a good amount of blue light or even white (full spectrum) lighting. The main reason for this is to reduce internode stretching to produce a stockier, healthier plant.

Most of these “new to horticulture” LED manufacturers are making claims that you should be using a full spectrum LED in flower to truly maximize plant terpenes and THC levels. But is this really true? See the graph below comparing what parts of the light spectrum is used for photosynthesis compared to the full spectrum light from the sun.

With all of these factors above, how do we answer our initial questions?? Quite frankly, there is no simple answer! Every grow is different – from different: strains being grown, growing climates by geography, style of growers, indoor versus greenhouse, etc. All of these factors will weigh heavy on what is better for you!

These claims are not totally bogus however. We are now seeing real results that a bit more blue light in flower or at the very end of the flowering stage does increase terpenes/THC levels. Depending on where you search you will find these amounts vary from minimal 3-5% to unreal amounts of 26-38% as in this article from HortiDaily supplied by an LED manufacturer.

HPS or LED: A Key Factor to Consider

ALWAYS ask for a light plan that shows an average light level in micromoles AND a uniformity average (hopefully above 90% uniformity). Most LEDs are a very directional source of lighting. If a crop is grown under lighting that is not uniform across your canopy but instead has “hot spots” and “dark spots” it will cause you trouble as the hot spots will use more water, evaporate water, absorb nutrients, etc. at a different rate of speed then the dark spots! To truly have an “apples to apples” comparison be sure to compare light plans with the same targeted light level in micromoles and close to the same average uniformity number. If a supplier cannot provide you with these numbers then it may not be someone you should be considering. 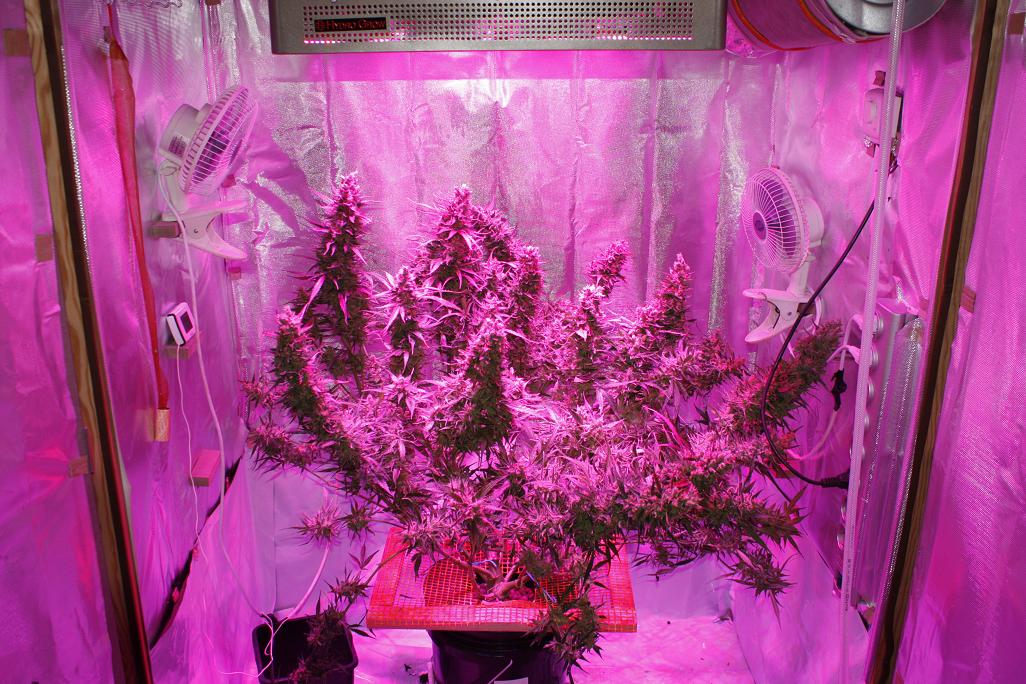 Compare a bulky HPS light with a parabolic reflector to a small sophisticated LED. The HPS is hot and heavy. An LED runs cooler, is often small and slim and won’t take up all the space in your tent. People with small grow tents often find LED is the best/only way to produce cannabis.

The combined benefits of LED mean that HPS is increasingly looking a dated technology, producing a light spectrum that is not optimised for cannabis and too much heat. LED, by contrast, does not waste energy producing the useless orange/yellow/green wavelengths.

A 600W HPS bulb wastes around 450W (75%) of the electrical energy producing heat. A good quality LED light with a 400W power draw would produce around 200W of heat despite having the same productivity as a 600W HPS. So the best LED’s only produce about half the heat of an HPS.

LED lights usually produce much less heat than a HPS light of comparable productivity. The lower heat levels from a LED means the leaves of a cannabis plant generally transpire (evaporate) less moisture under LED compared to HPS.

The advantages of LED are becoming more and more obvious and this is reflected in their increased popularity. With each passing year the power and efficiency of LED continues to improve. They are less expensive to run compared to HPS and run much cooler.

Why waste electrical energy to create excess heat from HPS lights only to have to pay a second time to remove the heat. Growing cannabis with LED is a better solution.

Due to the lower ambient heat levels associated with LED the plants may often show a reduced need for water consumption. Remember that when watering, since inexperienced LED growers can be tempted to over water their plants which reduces root growth and subsequent plant growth. Cannabis roots need oxygenation to grow fast, over-watering them reduces root oxygenation and reduces plant growth and yield.

The best LED growers have found that the lower levels of grow room heat and the cooler tent conditions with LED is allowing more of the delicate terpenes and flavonoids to remain in the plants tissues rather than being lost to the atmosphere in a hot HPS tent.